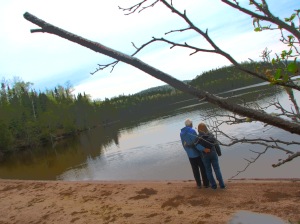 Rainbow Lake Park enjoying the view, The Dog is quite the photographer

Travelling Highway 17 along the coastline of Lake Superior you can almost believe the breathless adjectives in the North West Ontario travel brochures. “Epic adventures, fascinating history, outdoor adventures, stunning scenery” Wow, makes you want to get out there doesn’t it.

Choosing your next stop on a trip like this is a carefully thought out, painstaking process Take Ignace, our first stop in Ontario; Dude, “I’ve got to stop for gas” Dame, “It’s 4 o’clock, there’s a campground here, we may as well stay”.

Ignace like other towns we passed since entering Ontario has that whiff of better times gone by. Themes are important in small towns; it’s what makes the tourists stop. You have to have a big egg, or a giant goose or moose or hockey stick or something kitschy for photo ops. The theme here is float planes, one on each side of the highway. This is strange because Davy Lake, beside the campground, doesn’t appear large enough for a float plane.

A strange water pit on the trails where off-roaders prepare for Mad Max, the sequel

Kilometers of trails surround the campsite, many used by off-roaders. This became apparent when we cycled out the next day to explore. The trails were either rutted and sandy or narrow and root-bound. The Dame is a sissy-cyclist; I have a comfort bike for gawd’s sake. I’m all about flat trails, preferably paved and scenic byways. The Dude has cycled from Vancouver to Edmonton, I am the cycling albatross around his neck, but he agrees to cycle in town once the promise of ice cream is raised.

Next stop Thunder Bay. Now that’s a name with some testosterone behind it. It’s a port city, rough around the edges and the scene of every RV’ers nightmare – the dead-end road.

Houston we have a problem

The GPS is a godsend. But our guide let us down, a satellite malfunction that led us down a road with a “Road Closed” sign posted beside a drunken man lying beside it, who helpfully waved and pointed at the sign in case we hadn’t noticed.

The dreaded long back up. It’s how you react that makes the difference, which separates the true RV’er from the weekend warrior with their rental camper. The Dude, cool and efficient, starts the evacuation, ten minutes later, tire tracks crisscrossing the grass the Gray Ghost is free and heading east out of Thunder Bay towards the Terry Fox Memorial. Some days you just need a little inspiration.

An iconic image of a great man

2 thoughts on “Anybody need a used Floatplane?”