It’s easy to dismiss ‘Winterpeg’ as an urban sprawl set amongst a plethora of lakes, rivers and rolling prairie, but that is to discount its unique place in our nation’s history. The city and its surrounding prairie played a pivotal role in the country’s early development.

It is here the French, Scottish and English trappers first ranged for game to fill the Old World fashionistas’ insatiable appetite for animal pelts. These intrepid explorers formed a close association with the First Nation peoples they encountered, taking Indian wives and producing half-breed children by the score. By the time Canada had elected its first Prime Minister, the often-inebriated and at times not-too-honourable Sir John A. MacDonald, the Metis, as they came to be called, had settled the land.

By the time Sir John began pushing the railroad through in an effort to keep the country out of the clutches of our Yankee neighbours to the south, the Metis had established riverside farms to sustain themselves as the buffalo they relied upon for life itself disappeared from the great plains.

The Riel Ancestral home in the centre of urban Winnipeg

The new Canadian government, as indifferent then as it is today, refused to recognize their rightful claims and a leader was born. Louis Riel, hanged as a traitor though he played a central role in quelling the unrest and the subsequent formation of Manitoba as a province, is referred to on official government plaques as a “significant person” in Canada’s history.

Riel was forced to flee south, where he lived a quiet religious life until called back by the Metis to help do the same for the province of Saskatchewan. Half-mad and calling himself a prophet, he none-the-less rallied the Metis, who took up arms in what was to become known as the Red River Rebellion but was actually little more than a bunch of mixed-blood farmers fighting for their land.

It was at this juncture in history that Riel crossed paths with my great grandfather Dan Maloney, who came west with Canadian troops as a volunteer/guide, having previously travelled by Red River cart to the wilds of St. Albert, Alberta, where his name now graces the RCMP headquarters–Maloney Place.

A Maloney at Maloney Place

History has not recorded whether the two men met, but great grandad, not withstanding his morally suspect stand on the side of the federal government, went on to become an upstanding Albertan, fluent in English, French and Cree, and a member of its first legislative body.

White-knuckling it through Winnipeg traffic

After travelling for a while one thing has become clear; small is good, big is bad.

Our GPS guide, Ms. Funk (Grade 5 teacher, perfect diction and a bun, need I say more), always affable and ever-diligent about finding the shortest route from point A to B, led us on a merry chase from one secondary highway to another. On roads (highways?) that were so narrow and deserted that at one point a kindly Manitoban pulled up beside our truck in the oncoming traffic lane gesticulating madly towards the back of the trailer. As it turned, the sewer hose had escaped its bumper lair and was bumping down the road. It wasn’t the kind heads-up that surprised me but instead the gentleman’s complete faith that he could drive indefinitely in the wrong lane with no expectation of oncoming traffic. Gotta love Manitoba.

So far so good, right? Wrong. Winnipeg like so many of Canada’s major cities is bursting at the seams. Bordered by two rivers and split into North and South quadrants, the growth is outwards to the ‘burbs a vast wasteland of boxy condo’s and tiny Stepford-like homes in neighourhoods surrounded by industry and train tracks.

Apparently road repair and hodge-podge urban development is driving Winnipeg’s economy. Now, we are no traffic sissies. The Dude and Dame are battle-hardened veterans of the Vancouver traffic wars. My left eye still twitches when someone mentions rush hour on the Patella Bridge.Winnipeg traffic is different, planned to cause optimum inconvenience. Like Portage Avenue. Four lanes snaking through Winnipeg, the main through-fare from East to West and my chosen route to meet a friend on the southwest end of town.

An hour should be plenty to get there, I think, programming Ms. Funk. It started innocently enough, I cruised through the north-end of town, an eighties rock station blaring in the truck. As we headed into downtown Winnipeg, the ninth circle of hell begins. Traffic in Winnipeg isn’t worse than Vancouver, it’s that built up wealth of traffic avoidance knowledge that is missing. I don’t know the shortcuts, the secret back roads, the side roads that will lead me out of this nightmare. I am trapped. Even the song stylings of Van Halen can’t lighten my mood. 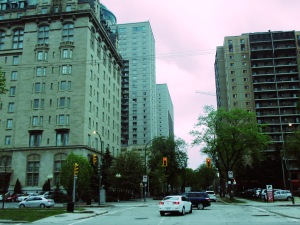 And then suddenly it is over. The orange traffic cones and warning signs are gone, four lanes of freedom lie ahead as I rev my engine and head west. Now if they could only get those traffic lights synchronized.

This car was new when the traffic jam started