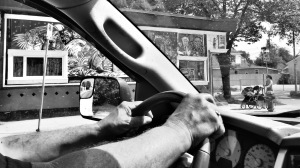 White-knuckling it through Winnipeg traffic

After travelling for a while one thing has become clear; small is good, big is bad.

Our GPS guide, Ms. Funk (Grade 5 teacher, perfect diction and a bun, need I say more), always affable and ever-diligent about finding the shortest route from point A to B, led us on a merry chase from one secondary highway to another. On roads (highways?) that were so narrow and deserted that at one point a kindly Manitoban pulled up beside our truck in the oncoming traffic lane gesticulating madly towards the back of the trailer. As it turned, the sewer hose had escaped its bumper lair and was bumping down the road. It wasn’t the kind heads-up that surprised me but instead the gentleman’s complete faith that he could drive indefinitely in the wrong lane with no expectation of oncoming traffic. Gotta love Manitoba.

So far so good, right? Wrong. Winnipeg like so many of Canada’s major cities is bursting at the seams. Bordered by two rivers and split into North and South quadrants, the growth is outwards to the ‘burbs a vast wasteland of boxy condo’s and tiny Stepford-like homes in neighourhoods surrounded by industry and train tracks.

Apparently road repair and hodge-podge urban development is driving Winnipeg’s economy. Now, we are no traffic sissies. The Dude and Dame are battle-hardened veterans of the Vancouver traffic wars. My left eye still twitches when someone mentions rush hour on the Patella Bridge.Winnipeg traffic is different, planned to cause optimum inconvenience. Like Portage Avenue. Four lanes snaking through Winnipeg, the main through-fare from East to West and my chosen route to meet a friend on the southwest end of town.

An hour should be plenty to get there, I think, programming Ms. Funk. It started innocently enough, I cruised through the north-end of town, an eighties rock station blaring in the truck. As we headed into downtown Winnipeg, the ninth circle of hell begins. Traffic in Winnipeg isn’t worse than Vancouver, it’s that built up wealth of traffic avoidance knowledge that is missing. I don’t know the shortcuts, the secret back roads, the side roads that will lead me out of this nightmare. I am trapped. Even the song stylings of Van Halen can’t lighten my mood.

And then suddenly it is over. The orange traffic cones and warning signs are gone, four lanes of freedom lie ahead as I rev my engine and head west. Now if they could only get those traffic lights synchronized.

This car was new when the traffic jam started