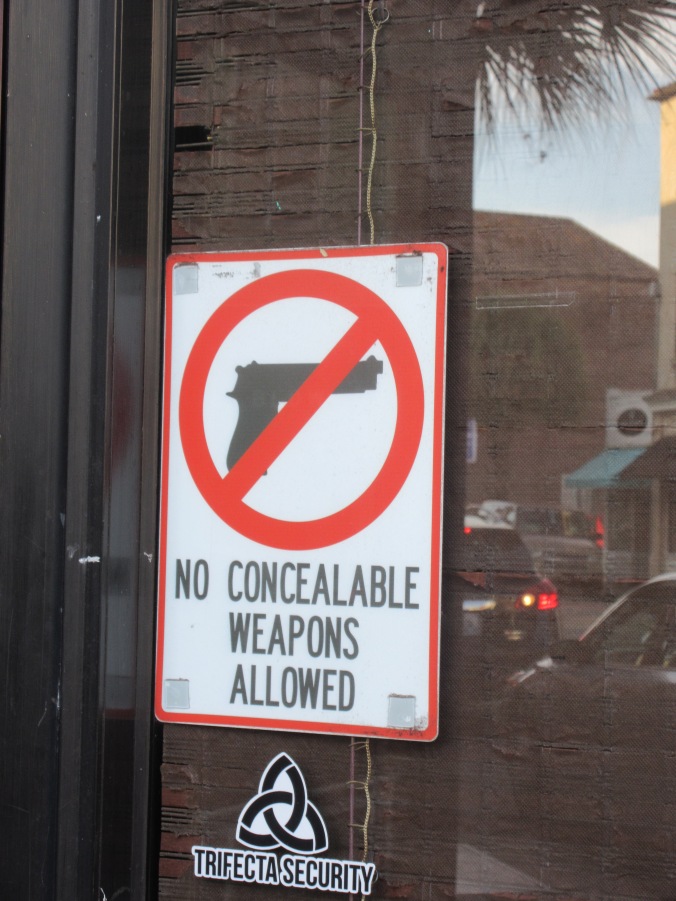 When are Americans going to get their collective heads out of their ample arses and admit their unhealthy love affair with guns is ending badly?

Gun lovers who cite the Second Amendment as justification for owning military-style arsenals have their heads buried so deeply the excrement has seeped into their brains.

The right to bear arms was enshrined in the constitution almost 250 years ago, in a century when the most prolific killing machine was a musket that required complex reloading after every shot.

When the founding fathers envisioned that an armed citizenry would act as a check on tyrants who might want to impose their will against the wishes of the majority, they weren’t thinking about assault rifles. Citing this tired Second Amendment argument in the 21st Century brings to mind Obama’s reply during the 2012 election campaign when his Republican opponent noted that the U.S. Navy had fewer ships than it did in the early 1900s. Obama wryly noted that the army also had fewer rifles with bayonets.

It’s going to take more than assault rifles to overthrow tyrants in the New Millennium. Fast forward a decade or two to a President determined to make America great again by restricting religious freedom, building walls around ghettos, monitoring its citizens electronically, muzzling unfavourable press and silencing all opinion, by force if necessary, that doesn’t comply with his vision, whether the majority likes it or not.
Think Donald Trump’s evil illegitimate child.

Picture this. Righteous freedom-lovers in the year 2040 organize on social media, gather their assault rifles and load up on ammunition before meeting in a stadium for an assault on Washington. NRA organizers pepper the clouds with bullets to hype the assembled 50-thousand dues-paying gun owners only to see their heaven-sent projectiles bounce off a shower of incoming hell-fire missiles launched from drones 10,000 feet above.

Information is the weapon of choice for today’s tyrants, backed by serious killing power that makes assault rifles as ineffectual as their single shot forerunners with fixed bayonets. The tyrants have nuclear weapons.

Where were the constitution-citing blowhards when the patriot Edward Snowden revealed the American government’s ability and willingness to spy on its own citizenry without benefit of warrant? He delivered his message at great personal cost: the government is spying on you, turning your cellphones into microphones and your computers into cameras.

Think about the implications.

The evil, illegitimate Donald Trump spawn can track your every move: when you go, where you go, who you talk to. And he can do it in real time.

Snowden was largely ignored by an apathetic populace. Instead of being revered by defenders of the constitution, he was labelled a traitor. Monitor everything we do 24/7 but don’t mess with our guns.

Do you seriously want Donald Trump’s sinister love-child having that kind of hold on you, or worse, a bitter overweight bureaucrat behind a desk in a bunker buried in a mountain? You can’t get to him no matter how many bullets a minute your assault rifle shoots.

The Democrats, under the stewardship of Obama, a former constitutional law professor, enlarged on policies implemented by the Bush administration in the hysteria that followed 911, even killing American citizens who have never been charged with a crime or had their day in court, citing national security concerns when asked by grieving family for proof of guilt.

Without a hint of irony, NRA lapdogs in government drape themselves in the constitution while citing the remote possibility of citizens being mistakenly denied their Second Amendment right to carry assault rifles. Their argument (seriously folks) is that mistakes can be made on a no-fly list, thereby temporarily denying the gun-owner his right to pack.
And everybody knows the government makes mistakes.

Americans wring their hands at the latest cop-shooting, or in the cases of Dallas or Baton Rouge, deranged men killing police officers with assault rifles. TV talking heads look gravely into the camera while telling a weary, fearful public about another mass murder in Dallas, or Orlando, or San Bernardino or Sandy Hook.

Bad guys will always get guns, say the gun-lovers, so good guys need to arm themselves in self defense. People are the problem, they say. Bad people. Crazy people. Orlando would have been different if the club-goers were carrying, says the Donald, calling for ankle holsters for the nightclub crowd.

There is no stopping someone intent on carnage in a culture that reveres guns, in a country that makes it easier to get an assault rifle than a license to drive a car. There is no peace of mind in a nation where troubled teenagers can reach into dad’s closet for a deadly weapon, no sanctuary in a gun-satiated society where drugged out criminals can steal lethal killing machines from almost any home.

No one seems to connect the fact that cops kill so many Americans because they’re scared crapless every time they make a routine traffic stop or attend a domestic disturbance. To a jittery cop in gun-lover land, every person reaching for a wallet or cell phone, white, black, Hispanic or Asian, teenager or senior citizen, is a potential, armed cop killer.

While the percentage of cop shootings is disproportionately high for non-whites make no mistake, the cops shoot every shade, and more white people than anybody else.

It’s time Americans pull their heads out, dislodge the fecal material from their mouths, eyes and ears and demand their political lapdogs stop licking the NRA’s encrusted rump. It’s time to revisit an outdated constitutional amendment that made sense centuries ago but is far too dangerous in a society rife with unhinged malcontents.

One thought on “A Gun Too Far”