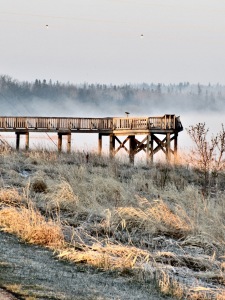 A glorious post-snow day in Alberta

We knew that Hell had surely frozen over when we awoke at a St. Albert campsite to six inches of snow after a May blizzard and news that the NDP had defeated the long-reigning provincial Conservatives, a historic first in the province of pickup trucks and baseball caps. A fitting beginning to our long strange trip across ‘the true north strong and free.’ 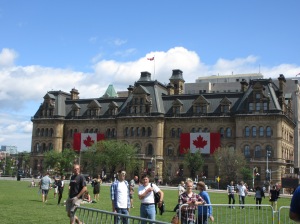 There’s a new sheriff in town

We watched the federal Liberal landslide online on old Cape Cod, an hour’s drive from Provincetown where the Mayflower deposited the Pilgrims on a crisp fall day in 1622. Contrary to the myth, North America’s first European settlers did not step from their boats onto Plymouth Rock but instead moved across the bay to that location after their first landfall at the tip of the Cape proved inhospitable.

One can’t help but wonder what they would make of the continent in the 21st Century. Driving across Canada leaves this traveller with one enduring question. What the hell happened? Or perhaps better stated: How the hell could it have happened?

To call the formation of this nation unlikely goes way beyond understatement. Canada’s existence is nothing short of miraculous, with a huge capital M and ten exclamation points.

The diversity and vastness of its geographical setting is jaw-dropping. No amount of map gazing can prepare one for the experience of driving from the deserts of southern B.C. through spectacular mountain passes and across plains that stretch to infinity on all sides, over the rocky Canadian Shield past lakes too numerous to count before arriving at lakes too huge to contemplate, then alongside a river stretching from the heart of the continent to a basin too wide to see land on the other side.
Considering oneself as a part owner of this huge swath of the globe, and therefore its caretaker, is humbling in the extreme and the responsibility would be overwhelming and frightening were it not for the presence throughout of those who share the burden.

While a country is defined geographically by its borders, a nation owes its identity to its people. And what a stalwart bunch we Canadians are. Canada is what happens when the world’s risk-takers are bound together under a government that not only allows but encourages their individuality and independence in pursuit of a better life.
And make no mistake, every person who left home and hearth behind for the uncertainty and inevitable hardship of settling in a new place with an uncertain future, and this includes First Nation peoples who came before the rest, is a risk taker of the highest order.

To see their accomplishments, and those of the ancestors who share their bloodline, to witness their cultures flourish and their religions on display in cathedrals, temples and domed churches, was to see the potential of the human race come to fruition in a setting befitting of our ancestors ingenuity, courage and optimism.

From the canals that harnessed the rivers providing water for the orchards and vineyards of the South Okanagan, to the roads through B.C.’s impossibly steep mountain passes, past Alberta’s derricks and gas wells that sustain our energy and the vast wheat farms of Saskatchewan and Manitoba that feed the world, to the transportation hub that became Winnipeg and the canal systems and locks of Ontario and Quebec that linked rivers and lakes to provide the country’s first highway from the Maritime provinces that built the ships and fishing boats, it’s one hell of a sightseeing trip.

What a great country.

One thought on “True North strong and free”