Clean sheets, water pressure and Movies on Demand, am I in heaven?

You don’t realize how much you miss having space until you haven’t had it for five months. Even the Dog is impressed as he saunters through the lobby of the Future Hotel in Halifax to our first floor room.

Leaving the Grey Ghost in Phil’s hands involved stuffing various clothes and sundries into cloth shopping bags. Suitcases are a moot point when your house travels with you. We bring to mind the Beverly Hillbillies on vacation, dog bed draped over shopping bags with clothes spilling out, as we wheel the luggage rack through the lobby.

Back to Halifax, as least the weather is good

We rationalize the Grey Ghost’s troubles as a mini-vacation from our vacation, a few days in a nice hotel room, sight-seeing around the area and back on the road.
The Dog and I renew our love affair with Point Pleasant Park and The Dude renews his love affair with the poker game at the Halifax casino.

And then Phil called.

Phil is what we’ve come to view as a typical Nova Scotian, friendly, plain-spoken with a gift for the gab, in this case a point by point breakdown on the abysmal state of the underside of our fifth wheel and a less than heartening overview of the state of repair. He’s like a cheerful Dr. Doom, happy to find his opinion of the motorhome industry has been verified. The three days has suddenly turned into a week and even that is tentative.

When in Truro be sure to stock up on underwear, lots of underwear, just ask the Dude

We head for Truro to further explore the Bay of Fundy. The motel is a step down from Halifax, but we invested in a twenty dollar rolling tote bag from Canadian Tire so we can look fancy rolling up to the our room, which is sparkling clean with a typical motel configuration and a door that opens out into a parking lot.

Truro is in mourning for a female police officer recently murdered in Halifax. A memorial in front of the police office affords family members, other officers and members of the public a place to pay their respects. It puts our recent inconvenience in perspective.

The Fundy Tides are the draw in Truro. Tourists are directed to the Salmon River at the edge of town to view the tidal bore that occurs twice a day. It’s like watching a tide come in on a river that has been drained of water. Unfortunately we have come at a time when the tides are at their lowest level. Curses batman!

A hidden gem is Victoria Park. The Dude will confirm the grass in the park is perfect for napping and the other two members of the Meanderers that the park has great trails, two waterfalls and a plethora of butt-busting stairs.

Truro’s Victoria part, this is the flat part before the stairs from hell

Though we don’t know it, our visit to the Minas Basin and the Five Islands area will be historic. A quaint lighthouse sits near the cliff on the basin’s edge, surrounded by fields of wildflowers. The tide is out when we arrive and we spot tiny bumps in the distance on the panorama of red sand. Binoculars reveal the bumps to be ATVs, parked while the drivers/oyster men dig in the sand. The sea arch, a large hole through one of the rock faces that comprise the Five Islands, is a famous area landmark. Er, let me re-frame that, the sea arch was a key landmark. Last week the arch collapsed. Not to worry, I’ve got some of the last pictures of it.

See that hole in the rock, it’s now just a pile of rubble.

Another call from Phil and more bad news, the axles need replacing. After sourcing every parts outlet in his 30-year repertoire, he locates them in Quebec but it will take time to have them shipped.

We’ve worn out our welcome in Truro and decide to head back to Halifax where we book at the Chebucto Inn. The reviews are mostly positive, though the surrounding area is given a less than glowing review. It could be charitably called industrial chic. The rooms are clean, food in the restaurant is good, and the surrounding area is a blend of condos, industry and Tim Horton’s. Have I mentioned that Tim Horton’s is a plague on the restaurant business? They are everywhere, like a donut and coffee-selling version of Walmart. 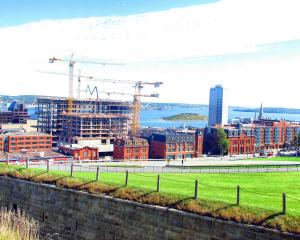 The days are spent walking the streets and along the city’s waterfront. I take the opportunity to visit a salon and shop at the Halifax mall as we wait for Phil to call.
When he does call it’s to inform us that despite his explicit instructions and measurements to suppliers, they managed to screw things up. He has to turn down other business while the Grey Ghost takes up his shop space. He’s makes a reference to the Grey Ghost as the trailer from hell.

The Dog is a poser at Pleasant Park

Finally the wait is over and we pick up the Ghost with its new shiny axles, brakes, bearings and assorted paraphernalia, which Phil feels the need to explain in detail. Coffers somewhat depleted, we head for Fundy’s western shoreline, the money shot featured in brochures – New Brunswick’s Hopewell Rocks.

Grey Ghost’s tribulations are forgotten as we watch billions of gallons of seawater cover the sand in a ritual that is as old as the earth, rising 48 feet up the rock faces in the space of a few hours. Back at the almost empty campground, where we are parked on the ocean’s edge, we view a blood red full moon eclipse while sipping Bailey’s and hot chocolate. 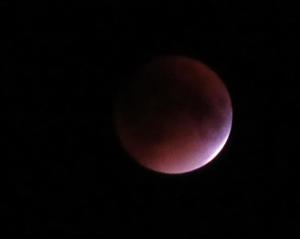 Moon gazing on the Bay of Fundy

The lovely languid days of Fall have begun and as promised the east coast is a landscape of burnished red, orange and gold trees. The scenic Okanagan landscape has nothing on this area when it comes to Autumn colours. We spend a couple of days in St. John before finishing up the Canadian portion of our trip in the resort town of St. Andrews. Famous resort area is code for “seriously rich folks summered here”.

One of them was Sir William Van Horne, who oversaw the construction of Canada’s railroad way back when and is among the bearded men in waistcoats in the iconic famous Last Spike picture. Not content with building a railroad from coast to coast he turned his attention to his country estate on Minister’s Island, which is only accessible by road when the tide is out. To get to it we must drive “across the ocean floor.” 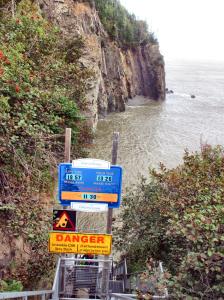 His family summered on the island, travelling from their Montreal home to the island mansion, where they entertained the era’s swells with sumptuous dinners followed by brandy and billiards. A Renaissance man whose landscape paintings decorate the mansion, Van Horne was a successful farmer, growing crops and raising prize-winning livestock on the self-sustaining estate. Or rather, overseeing the people who did the actual work. And he did it all without putting his head to the pillow for more than four hours a night. An antithesis to the Dude, he viewed sleep as a time-wasting bad habit.

What is it with rich guys like Van Horne and their need to mount animals on their mantles, compensating much?

Thanksgiving at the Algonquin hotel was a trip back in time — elaborate table settings, beautifully embossed china, discreet décor, attentive waiters. I have decided yet again that I am meant to be rich. Make it so, Jeeves.

We are eager to begin the U.S. portion of our trip before the weather changes and the exchange rate gets any worse. For a political junkie like me, with our Canadian election season ending and the American one rolling into high gear, this is going to be fun!

Maybe we’ll see Trump or Hillary somewhere during our travels.

Hopewell Rocks, what we call the “real” Bay of Fundy. In a before shot

Hopewell Rocks, an hour later, the tourists who made it up the stairs have quite the tale to tell

One thought on “Dr. Doom and a fond farewell”