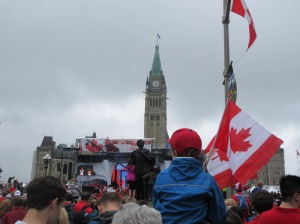 On this “no plan” trip we did have one plan, one date that we had to keep, to be in our Nation’s capital on Canada Day. It seemed right to spend the day surrounded by the parliament buildings that symbolize the freedom and absolute good luck we all have to live in the best country on earth.

It was a good decision.The torrential downpours were offset by smiling faces, weird Canadiana costumes, a melange of colours, creeds and a patriotic pup. Oh yeah, and the prime minister showed up.

Soldiers patrolled the building tops with high-powered binoculars, RCMP strolled through the crowd, polite and joking while they searched bags to enter the parliament grounds. At Ottawa’s first big public event since the murder of a soldier and attack on parliament it felt safe on the streets with tens of thousands of our fellow citizens and visitors from around the world.

Score one for democracy.

And when we walked past the tomb of the unknown soldier, where the murder took place, and the steps covered in little paper flags that people spontaneously placed, we felt proud and glad to wear that Maple Leaf. 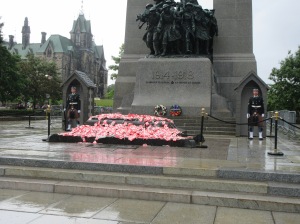 They told us the Stampede would have horses!

Enthralled by the beautiful Nubian princess, John forgets what he was going to say

Even my shoes have Maple Leafs on them 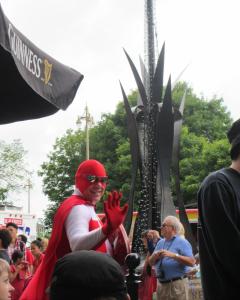 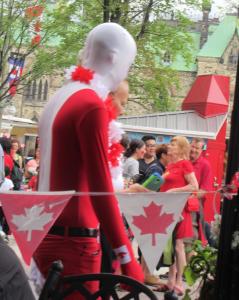 Rejected by his own kind, Condom head man leaves the party 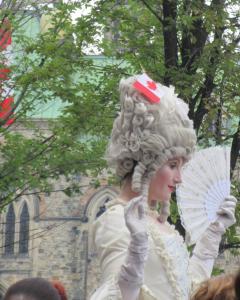 Drenched Marie Antoinette comes out of the rain shouting “Let them drink beer!” 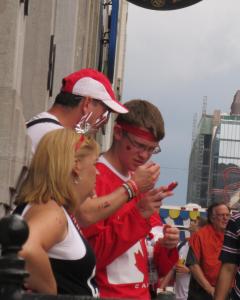 Parliament decreed that all flowers will be red or white on Canada Day, tough luck for the local dandelions 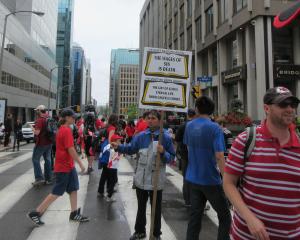 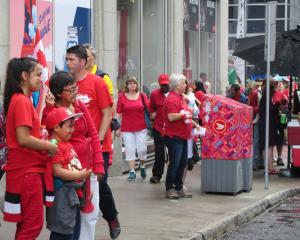 The torrential downpour didn’t faze anyone

The guy selling umbrellas did a brisk business

Stephen Harper and family make an appearance before the plebes

Father and son wear their patriotism

Take another one, my eyes were closed

Harold hopes the temporary hair colour will wash out

Street performers around every corner

The world saved once again, Captain Canada heads for home 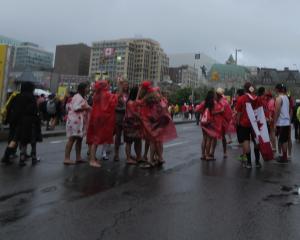 The Parliament hill stage was rocking all day

A cocky Mimi struts her stuff up to Parliament Hill

7 thoughts on “A Canada Day for the ages”