The Dude getting his barking squirrel on in happier times

A while back the Dame made light of my strategy to make my way through Quebec without speaking the language by “shouting Rene Levesque” in any situation I deem questionable.

It’s a technique I’ve developed over years of travel. When trying to communicate with someone when there are only two choices, those being English and the native tongue, you are essentially exchanging gibberish with a stranger. Who knows, the person may actually be spouting gibberish. The first rule of travel is to never knowingly put yourself in a dicey situation.. Talking gibberish with a stranger in a foreign land is dicey,

Now, those that know her are aware of the Dame’s propensity for exaggeration. The name needn’t be shouted, at least not at first, but should instead be delivered in a firm, clear, distinctive voice.

Nothing to it, right?

The best thing is my technique works anywhere. Merely go online and Google significant people in whatever country you’re travelling in: i.e. In Cuba say “Che Guevara”; in Russian it could be Nikita Kruschev, in Brazil simply “Pele.” This invariably stops the other person in their tracks. They stare at you inquisitively, often saying only a single word in reply. Here in Quebec they might say “Pardeau”, or some such gibberish. To which you reply “Rene Levesque” with slightly more urgency. On the third repetition the foreigner backs away smiling kindly and you are no longer talking gibberish with a stranger. 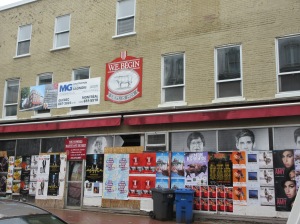 Hey you can mess up our storefronts but make sure you don’t litter and remember kids to recycle!

Take the other day for instance. I awake with a dull pain in my lower back. Immediately thinking kidney stone, and remembering the sharp pain that is sure to follow, I inform the Dame a trip to the “urgences” department is in order. I sense things might not go well when a disembodied voice booms through the crowded waiting room calling “My Kale Mal-o-ney”, followed by a lot of gibberish.

In short order I find myself strapped to the floor in a wheel chair in a senior’s home bus in transit to another hospital. Shouting “Rene Levesque” only spurs the driver on to greater speed. After a lot of gibberish at this second location I am wheeled upstairs and shunted through a round machine and then pushed to a second room where a young French woman swabs my torso in jelly and begins moving a mouse over my body. I think she’s saying ultra sound but I can’t be sure.

Welcome to Urgence, My Kale Maloney

After an hour or two of convalescing on a cot in the hospital hallway an English-speaking gastro arrives with a diagnosis. Pancreatitis, he says, before launching into an interrogation about my personal life. He wants to know how much I drink. It’s about this time I’m wishing he only spoke French. Who knew six or seven beer a day is hard on the pancreas?

In short order, I find myself sharing a hospital room with two French ladies of advanced years, one of whom yells something that sounds like “why” but could be “oui” at 30 second intervals. I am deprived a food by a sign saying “ajeune” on my bedside table and punctured with needles attached to not one but two intravenous bags. 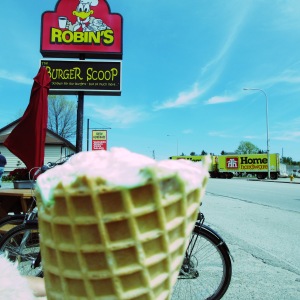 Deprived of food The Dude has ice cream hallucinations

Have you ever had to pee every half hour attached to a pole by a needle sticking into your vein? The final indignity is when Rene Levesque reappears in this report. What else do you say to a gorgeous Francophone nurse who is talking to you in gibberish while indicating with her hands that the instrument she is holding must be inserted in your bum. I don’t even have a working bum but how do you tell somebody that in gibberish.

This was clearly a questionable encounter and I responded with a rousing string of “Rene Leveque’s”. Instead of backing away the nurse pressed forward. For the moment a stand-off. I’ll leave it to your imagination on whether Monsieur Mal-o-ney eventually bent over. 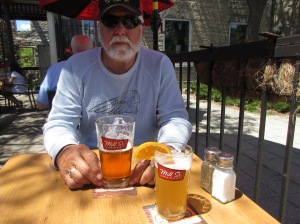