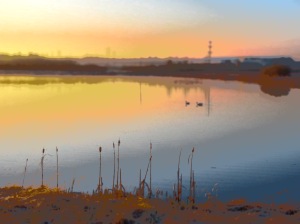 ….and the dawn’s early light

Meandering has meant a change in the Dame and Dog routine. Having a big field next door made it easy, out the front door he went, business completed, all good. You’ve gotta plan things now. Like potential routes, like your appearance, tattered sweat pants and a hoody doesn’t cut it in the RV world. Windbreakers, shorts and logo’d t-shirts of where you’ve been. The Dog is easy, give him a light post, a patch of grass and some random dog’s butt to sniff and he’s happy.

But something magical happened the other morning when we set out to find the right light post and grass patch. We found Zen along the Sturgeon river. Is that where Zen has been hiding you’re probably asking yourselves and friends I do believe it has been. It’s quiet, it has birds, lot’s of them, all singing merrily in the morning and do you know even though I hadn’t had my first coffee of the day yet. I enjoyed it, every single chirp, tweet and caw. It was peaceful, beautiful and strangely moving. So Alberta, I forgive you for the snow, the Oiler’s however, I can’t forgive.

2 thoughts on “The Zen of dog walking”