Even in the pouring rain the infamous bridge is pretty amazing and brings flashbacks to life in Vancouver, cue the Taiga jackets and rubber boots

The Bay Area, home to seven million people spread over hill and valley in 101 cities and nine counties, anchored by the metropolises of San Francisco and Oakland on opposing shores and San Jose on the southwest flank, has drawn adventurers and counter culture wanderers, alternative lifestyle seekers and brilliant intellectuals, beat writers and music titans, religious charlatans, psychics and self-help gurus, since the California gold rush of 1848 established it as the sea-going gateway to America’s West.

Song writers have rhapsodized about its allure ever since. In more recent times Tony Bennett built a career crooning about leaving his heart there while Scott McKenzie invited the world’s hippies to join the party in Haight Ashbury, but only if they “were sure to wear a flower in their hair.” Even the Animals got in on the act with Eric Burden’s biker inspired travelogue about San Francisco Nights–“Angels sing, leather wings / Jeans of blue, Harley Davidson’s too / On a warm San Franciscan night.”

Arriving from the Monterey Peninsula is not the stuff of songs, unless they’re about the ass-clenching fear of negotiating frequent lane changes on ribbons of concrete occupied by speeding vehicles of all sizes and descriptions, their drivers bent on getting to the off ramp at a place that will connect them to a safe landing in the shortest possible time. Most of them heavily armed.

This 2 level bridge collapsed during the earthquake, gulp

A closer look at San Quentin

We decided an RV park in Marin County would be our safe place, notwithstanding its less then idyllic location in the middle of a waterfront industrial area backed by a fetid, low tide mud flat that smelled strongly of sewage. Across the muck and water loomed the foreboding guard towers of San Quentin Penitentiary, where Johnny Cash famously recorded an album in front of its cheering inmates in 1969.

We didn’t choose it for the heavy industry or view of San Quentin, which were not mentioned on its website, but instead because it’s a 15 minute-walk from the Larkspur Ferry, which deposits commuters, suburban shoppers and tourists at the San Francisco Ferry Building on the downtown waterfront at regular intervals throughout the day.

Once landed after a mid-morning sailing, we made haste among the strollers, joggers, skateboarders and freaky people of the Embarcadero to Pier 33, where multitudes from the world’s four corners gather daily to do their tourist time on the Rock.

Alcatraz. The last stop. Place of no escape.

The Man in Black may have “walked the line’ in San Quentin but Alcatraz was “the end of the line” for many of America’s hard men. Al Capone played in the prison band and drooled in his cell until being released in a demented state to die of syphilis. Machine Gun Kelly saw the error of his ways within its walls, earning the derisive nickname ‘Pop Gun Kelly’ for his good behavior. The psychotic murderer Robert Stroud became American’s most famous jail birder.

What strikes temporary guests is its proximity to downtown San Francisco, the city’s skyline shining in the sunshine, aglow at night, so close but so unattainable, as if to further torment the prisoners with a visual taste of the world they’ve left behind. Sightseers are encouraged to wander the grounds, even to bring picnic lunches and make a day of it with the kids.

We began with our stint in the pen with a short film, outlining the history of the American Gangster era’s most famous crowbar hotel, which closed in 1963 after 29 years of hosting bad guys. In that time, 36 inmates tried to escape. Twenty-three were captured, six were shot to death and two drowned. The other five went missing and were presumed drowned.

The cell block audio tour leaves no doubt that the Rock was a desolate place occupied by men desperate to leave it behind. The hard men’s high-flying lives of crime were reduced to five feet by 9 feet, with a cold-water sink, a toilet and a cot. Bad behavior, which constituted any violation from a long list of rules, earned a spot in solitary, where the slightly larger cells did not make up for the constant darkness and isolation. Prisoners showered infrequently under steel shower heads in an open concrete room while guards watched to insure potential weapons weren’t concealed in body cavities. No bum raps, so to speak.

A couple of hours on The Rock is enough to convince budding young criminals on the tour that the thug life is no good life.  Even in a cold spring rain, the ferry ride back to San Francisco seems upbeat in contrast.

The view from Alcatraz, so close and yet so far, except if you’re Clint Eastwood of course 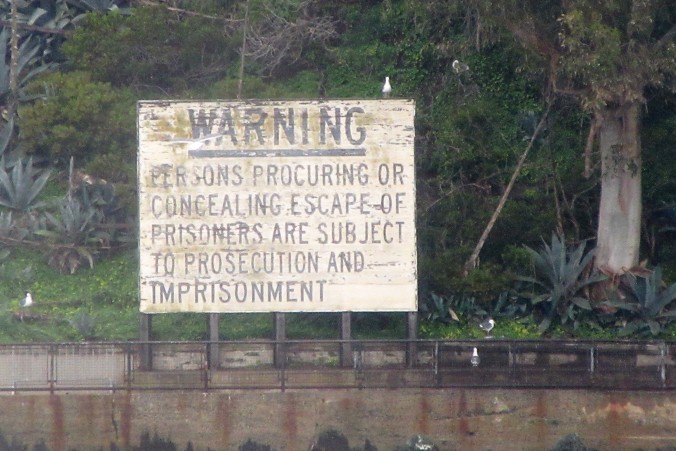 Also, don’t even think about not buying something from the gift shop on your way out 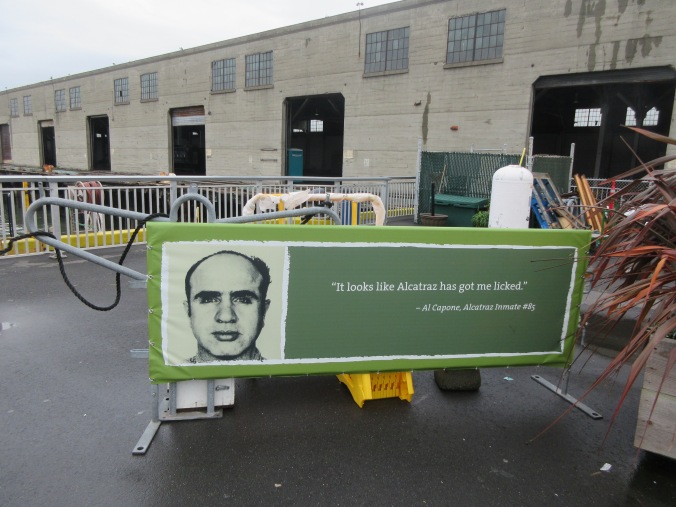 Al Capone went mad in Alcatraz from syphilis, not quite as glamorous as dying in a blaze of machine gun fire like some of his counterparts in the biz

Cell Block B is open for tourist business

Please note, board games not included with incarceration package

The “Indian’s Welcome” is graffiti left after the 1969 occupation of Alcatraz by Native American Indians who lived on the rock from Nov. 20th 1969 to June 11th, 1971 willingly. Prisoner 2671 is shaking his head in disbelief

After a couple months in the sunshine and arid climes of Arizona and Southern California, the Wet Coast’s grey drizzle hits former Vancouverites like a rain-forest flashback. We decide to wait out the storm with a side trip to nearby Sausalito for breakfast on our second day. By afternoon, the now-constant downpour, a certifiable-el Niño-inspired-heaven-sent-non-stop-torrent, drowned our plans to continue up the Oregon Coast. A short but soggy doggie outing to the rank mud flat left Dude, Dame and Dog with a hankering to leave our hearts in San Francisco and take our water-logged bodies east, across the Sierra Nevada mountains, braving sleet slanting down in Donner Pass, with its history of cold death and cannibalism, in pursuit of sunshine in the Biggest Little City in the World.

Next up, Reno surprises. 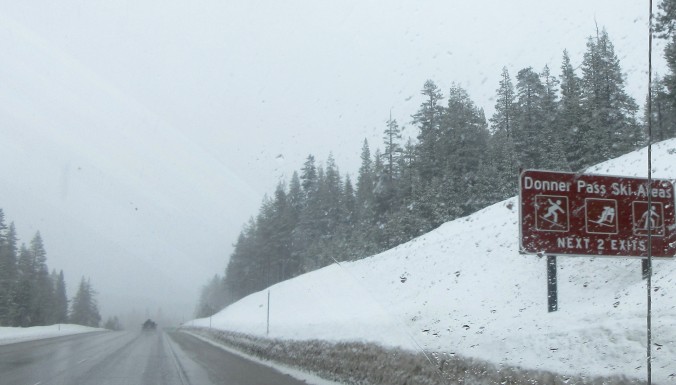 Donner Pass is now a ski area, cannibalism optional at the various eateries on the hill. Also at 7000 feet, the summit is a formidable trip and and down, the Dame was a tad white-knuckled

2 thoughts on “I Left My Soggy Heart in San Francisco”