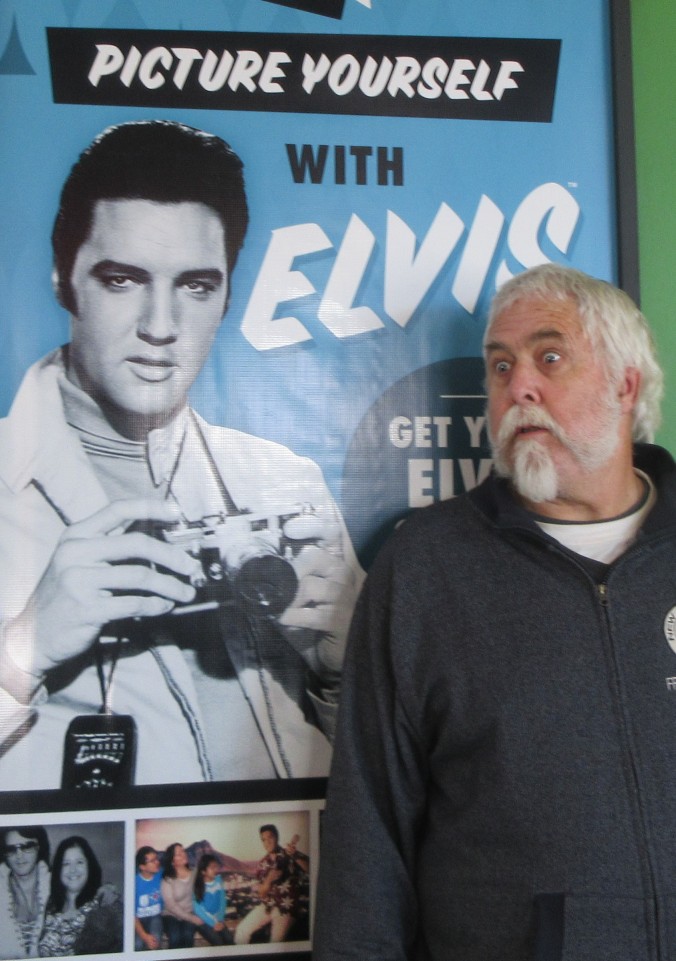 The Dude calculates the exchange rate for the tour

The phrase coined in France in 1422 after the death of King Charles VI and the subsequent ascension to the throne of Charles VII could well be the modern day motto of Memphis, Tennessee. City fathers could not have found a more fitting summation of this southern city’s allure than the English translation—The king is dead, long live the king.

More than 50 years after the King of Rock and Roll, with a then-bloated pelvis and his pants around his ankles, toppled from his porcelain throne at age 42 and expired on the bathroom floor of his hillbilly castle, fans from around the world flock to Memphis to breathe in his charisma in the place he called home.

Now a national landmark, Elvis Presley’s Graceland mansion is a must-see on every tourist’s list of things to do in Memphis. No matter that it is an overpriced tourist trap in a somewhat dicey part of town that commercializes the King’s image to the point of sadly comic caricature. It’s the place where Elvis frolicked with his hillbilly friends and relatives and that is enough for fans who come to pay homage, many of whom were not yet born when he made his final face plant.

Graceland is located on Elvis Presley Boulevard, down at the end of lonely street across from an RV Park and the Heartbreak Hotel. The mansion sits across the boulevard from the main commercial enterprise, where visitors pay $10 bucks to park before entering the Elvis shopping mall, from which a shuttle delivers those with tickets to the mansion’s front door.

Three TV’s in the media room, one for each channel available at the time 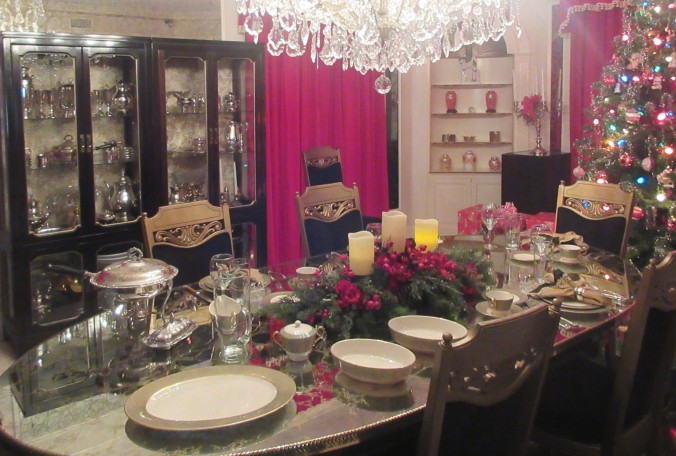 The dining room where Elvis and the Memphis mafia gathered

Okay, technically this wasn’t in Graceland but you just know he would have had one

This is where the infamous Peanut Butter and banana sandwiches originated

The tour begins in a shuttle line where desultory ticket takers check bags for contraband before handing out I-Pads that guide visitors through the mansion, beginning with a living room/entertaining area with stained glass peacocks and a baby grand piano. Elvis, informs the I-pad, loved music. Gawkers are assured everything is as it was back in the day when the King let his dyed black coif down and put his feet up on the furniture.

The dining room table, where the King took his sustenance, is set for a meal beneath a giant crystal chandelier. The spacious kitchen next door, where cook prepared Elvis’ famous fried peanut butter and banana sandwiches, is equipped with the modern conveniences of the day, including an antiquated microwave oven and a bulky small screen TV.

But it is the added-on jungle room in back that captures the ambiance of the times. Elvis furnished it with ornate custom cowhide chairs and sofas with fur (do cows have fur?) still in tact. One can’t help but picture a naked female bottom going against the grain, so to speak. If such things happened in the jungle room the I-pad tour does not mention them. The wood panel wall treatments must have cost a lot but they look about the same as the ones in Uncle Herbert’s basement. The room is topped, quite literally, with green shag carpet stapled between wood ceiling beams. The shag matches the floor and is said to have enhanced the acoustics in the room.

Downstairs in the man cave one can feel Hugh Hefner’s influence on the times. A long black couch festooned with white throw pillows provides seating, or perhaps a reclining area, for guests to watch the three tube-style TVs built into the far wall. The room features a yellow wet bar upon which a sign advises tourists that touching is not allowed. The well-worn pool table in the adjoining room bears the torn-felt a trick shot performed less than proficiently by a member of the Memphis mafia.

We are informed by our I-Pad, without any hint of irony, that the tour, out of respect for the King, does not include Graceland’s second floor and the bathroom in which he met his maker with bum cheeks exposed.

The mansion tour includes a long walk-through trophy room, which showcases Elvis’ incredible career with wall displays of his platinum 45s, albums, costumes, charitable contributions and tributes from record companies and the many charitable causes he supported, all to the musical accompaniment of a string of the King’s hits. 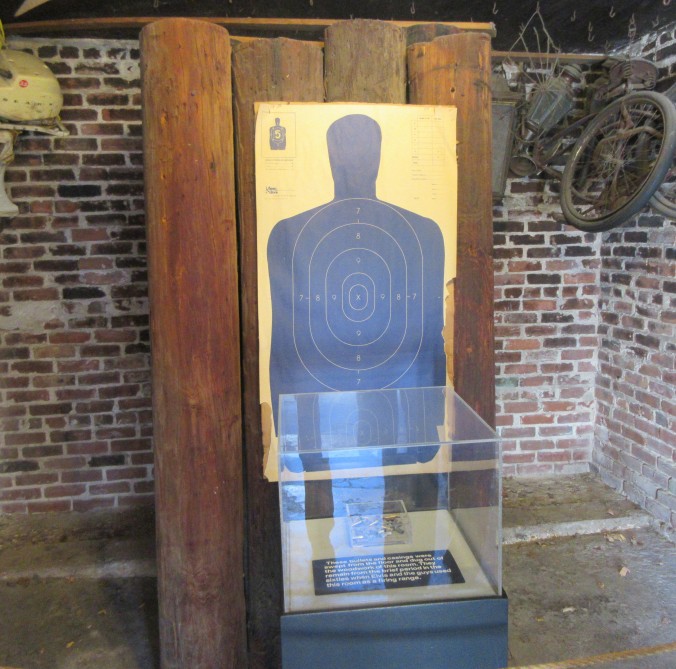 After a little guitar pickin’ the boys would shoot at things

The paddock still remains, a peaceful oasis in the sea of commercialism around it

The I-Pad guides us back outside, where the King raced his horses around the 13.8-acre estate’s paddock, next to the two-storey racquetball court/gym/lounge he had built behind the house. A winding stone path takes us past the driveway where he parked his Cadillac’s, motorcycles and the off-road toys he and his Memphis mafia buddies used to tear around the estate and onto the boulevard out front.

The tour takes a more somber turn as we pass the guitar-shaped pool and enter the memorial garden where the King rests in the company of his beloved mother Gladys, father Vernon and a plaque inscribed with the name of his twin brother, who died at birth and is interred elsewhere in the state.

You might think the basic mansion tour covers all the bases for even the most ardent Elvis fan. Not so, Presley piker breath. We splurged for the $47.50 Platinum Tour, which entitles us to experience more of Elvis back across the street at the shopping mall complex. Much more.

The car museum opens onto a gift shop through which visitors pass an array of Elvis memorabilia ranging from T-shirts to ash trays, from guitars to sequined white jump suits, from oversize silver rimmed sunglasses to key chains and shot glasses, all offered at special tacky tourist prices.

The gift shop leads to the Elvis archives, where never-before-seen (except by the millions of tourists who have traipsed past over the years) photographs of the King are displayed next to outfits he’s wearing in the pictures. Here, a fringed buckskin jacket he wore in the snow, there the bell-bottom velvet trousers that encased his pelvis on stage.

Enough already, you say. Not nearly, King of Rock and Roll lightweight.

There is a movie theatre where you can become engrossed in a stellar Elvis flick set against a backdrop of exotic locales with a string of scantily clad starlets thrown in. So what if the story-line never changes. The Colonel knew a winning formula. No Elvis movie ever lost money. After the picture enjoy a burger and coke in a diner that smells like a vat of grease, or jerk your sequined jumpsuit with a shake at the soda fountain.

You’ll need to fortify yourself for the rest of the gift shops and your continuing quest for that perfect Made-in-China trinket that says I saw Graceland. And don’t forget the airplanes parked on the gift shop tarmac., customized by Elvis to take you into the fantasy world of a rich hillbilly

The man loved a loud shirt 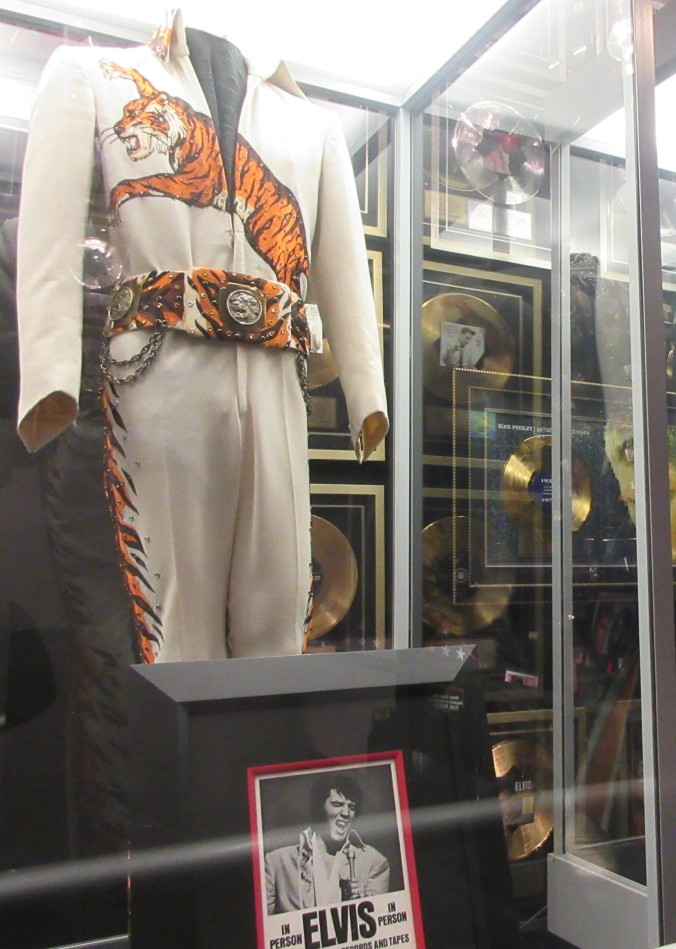 Sure jumpsuits are comfy, but where do you put your wallet?

The interior of the Lisa Marie, one of two planes the King owned

This was the model for the Mary Kay empire 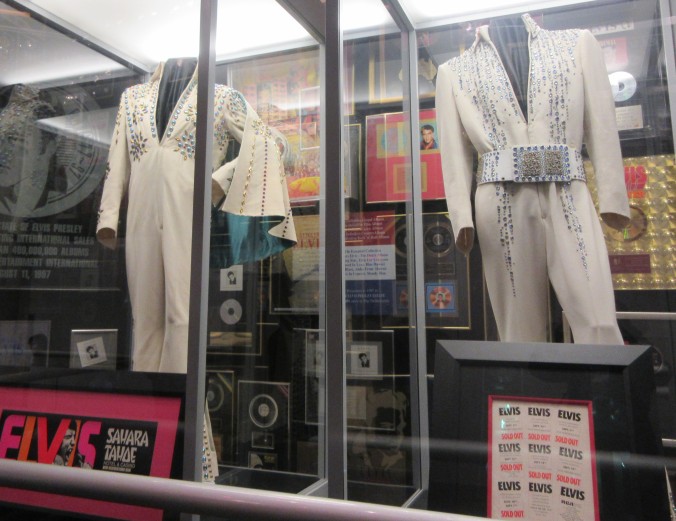 As if a sequinned jumpsuit wasn’t enough, they added a cape to the one on the left

Apparently Ray Liotta is a fan, who knew 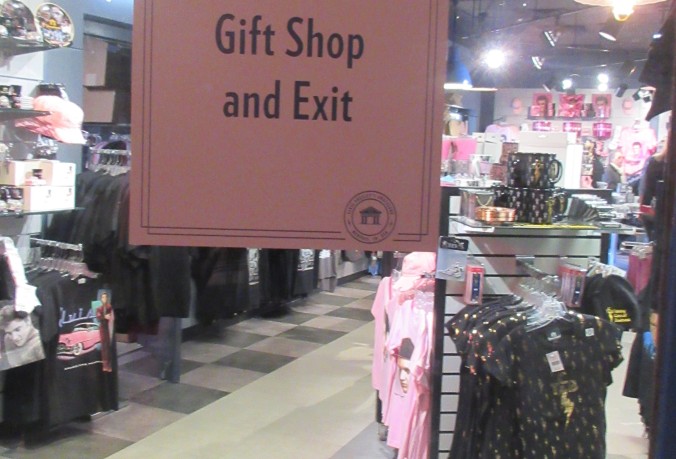 No wonder the man is richer dead than alive

2 thoughts on “Long Lives the King”