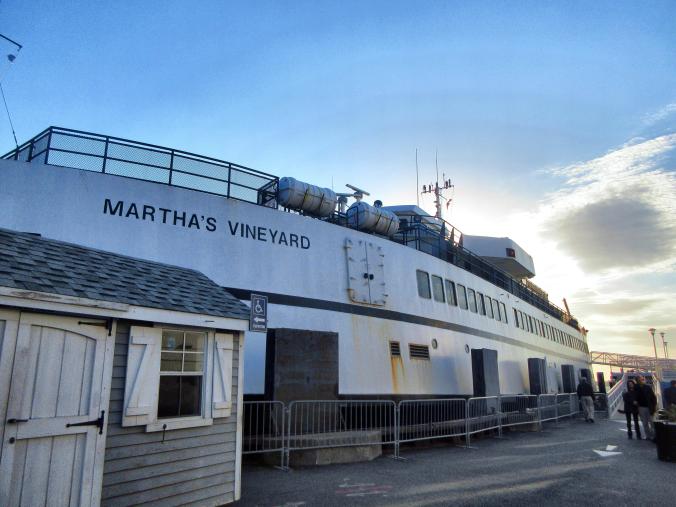 Somehow I expected something fancier

Did you know George Washington had wooden teeth? Learn this and many other fun facts when The Meandering Maloney’s go to Washington.

But first we have to finish with Cape Cod, home of the famous houses, rolling dunes, impossibly twee towns, expensive real estate, and the Kennedy’s.

Along the Cape, the salty sea air is laced with the smell of money. Old money. Big money. Homeowners give a shout out to the season with fall decorative displays that would not look out of place in the windows of Macy’s. Not the Dollar Store displays and misshapen gourds I’ve been known to throw together before a dinner party, but Martha Stewart dioramas. Life-size straw-stuffed figures perched on hay bales with massive, perfectly round pumpkins and gourds surrounding them, all tastefully arranged to induce maximum decorating envy.

Martha’s Vineyard is a must stop, even though it requires leaving the truck behind for a ferry crossing. The name is ingrained in the plebian mind as a place where the really rich and famous buy houses and hobnob with other rich and famous people. Tennis anyone? How about an afternoon of sailing on my 100 ft. mahogany sloop. We plebes take the ferry over, sans truck. Surprise, surprise, La Dog is welcome aboard, though putting a leg up on the ferry railing to let other snooty pooches know you’re around is discouraged.

Always the gentleman, The Dog refrains from sniffing butt while boarding

How many gift shops can be crammed into a two-hour visit? Answer: ten, with a stop for fudge. It still leaves time for a stroll past waterfront mansions set so far from the street we can barely see the crews of gardeners tending the manicured lawns. We dip our toes in the water by the yacht club before heading back to the ferry. After our brush with wealth, we leave Martha’s with wallets only lightened by the price of New York style pizza slices. Even Cape Codders know who makes the best pizza.

Back to George and those wooden teeth. Our original plan included a stop in New York, where RVers put down across the water in Jersey on sites without sewer hookups for $U.S 80. A ferry takes them into Manhattan past the Statue of Liberty. Since this is a trip without a plan, we blasted past New York with a fond wave at the distant new World Trade Centre, promising to come back another time.

Navigating the Big Apple’s freeways is like playing bumper cars for keeps. Leave a sensible 20-foot between you and the vehicle in front and a car, truck or transport will swerve past your bumper to fill the gap. Moving over four lanes to get to your exit while pulling a 10,000-pound fifth wheel dwarfs any fairground ride you’ve ever taken on the excitement meter.

We enter the Jersey Turnpike on the advice of Gertrude, who tells us it’s the fastest route to Washington but fails to inform us about the modern day highwaymen along the way. The roadside robbers disguise themselves as toll-booth attendants who cheerfully (Who am I kidding. They’re not cheerful; they live in Jersey for gawd’s sake.) demand money at frequent intervals. Stand and deliver, driver from B.C.

They missed the sign about rights to your first born

The Dude literally sputtered at the end of the Turnpike when the booth bandit demanded $U.S. 42.50. After quickly calculating the risks of blowing through the booth and the high-speed freeway chase that would follow, the Dude grudgingly handed over a wad of the now spittle-soaked money we didn’t spend in Martha’s. The fact we were the only RV on the turnpike should have been the first clue.

Cherryhill Park outside Washington is the gold standard by which all other parks will be measured. If they don’t have it, it doesn’t exist. You need transportation, they’ve got it. Worried about getting around in Washington, they have an orientation session with all the stuff you need to know and stuff you didn’t know you needed to know. Need tickets for anything remotely touristy, they’ve got it. Need to eat, hey, they’ve got a reasonably priced restaurant on site that has ice cream. Feel like staying in and watching a movie. No problem. They deliver delicious pizza to your RV’s doorstep. Need clean clothes; they’ve got a laundromat the size of an airport hangar.

Note the giant Bald eagle to the right, in case you didn’t realize you were officially in the United States

Finishing the orientation session, we spontaneously purchase a night bus tour leaving in half an hour. The free shuttle bus to town is driven by a guy we’ll call Bunk, after the character in The Wire. Those who know The Dude might recall his love affair with the HBO series. He’ll even lend you the DVD’s so you can join the club. But I digress. Bunk the driver is a former basketball player, good enough to get a full ride to university. We’re his only passengers and he’s happy to share stories of his youth, the subsequent addition of the 50 or so pounds that forced him to switch from basketball player to coach of his kids’ teams and the reality of daily life in Washington, a city that cheerfully supports losing sports teams because politics is the real blood sport.

Washington by night is surreal. The softly lit city looks all warm and fuzzy from the safety of the open-air double-decker. Iconic landmarks like the Washington Monument and the Lincoln Memorial literally glow in the dark. We were advised at the-campground-that-has-everything to bring flashlights for walking around the areas like the Vietnam wall and the Martin Luther King monument. 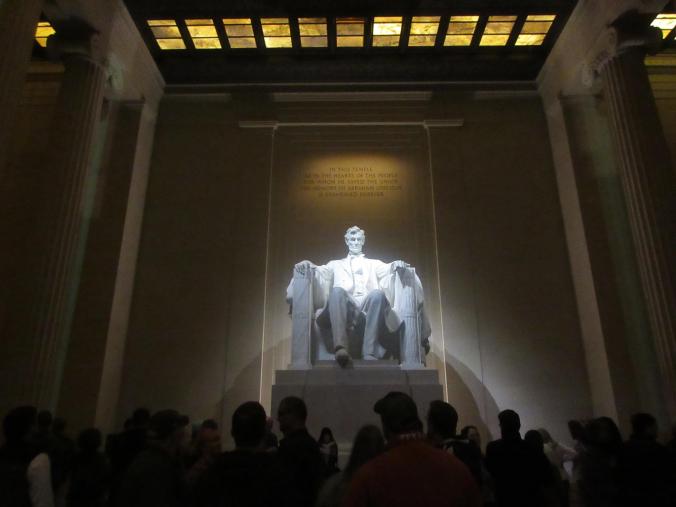 It is even more impressive in person, now if only all those pesky tourists weren’t in the way

The Lincoln memorial is astounding. A marvelous sculpture that rivals Michelangelo’s David for its exquisite detail, it commands the viewer’s attention from its colonnaded perch overlooking the national mall. Lincoln beats out David for his historical significance and the fact the sculptor kept his pants on.

The White House appears mundane in comparison. After a lifetime of viewing the presidential residence in the context of life-changing historical events, it seems much smaller in reality, like revisiting an old house that looms large in childhood memory. More interesting was the make-shift structure of an enterprising protester at the edge of the park across the street. A quick perusal of his placards reveals his general dissatisfaction with Keystone, GMO’s, Nuclear weapons and Justin Biebers new hairstyle.

A tale of two houses

Mount Vernon, the historic plantation home of George and Martha Washington, is mecca to patriotic Americans and a must-see tourist stop. The man with wooden teeth is a study in contrasts. A fearless soldier who defied great odds in leading his bedraggled troops against the British, he was foremost a businessman and farmer who preferred life at the plantation to the corridors of power in Washington. He kept slaves and buried them in unmarked graves in a wooded area far from the house but was a benevolent slave-owner who decreed in his will that upon his death all his slaves would become free. Most stayed on to work his farms, of which he owned five, and his distillery and mills. 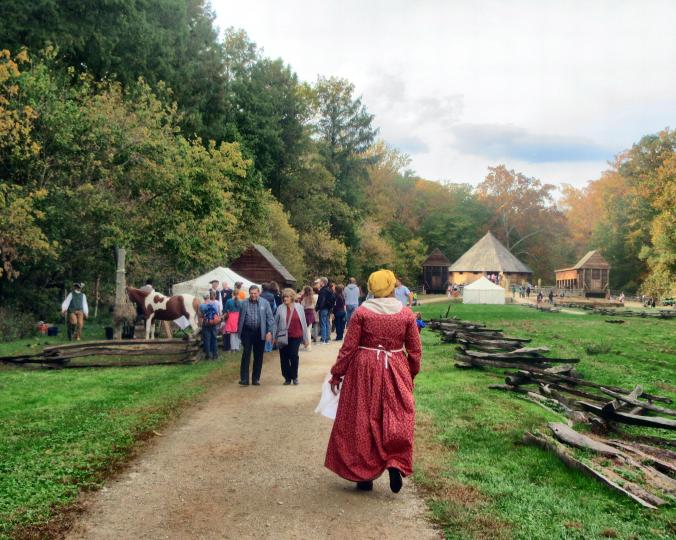 Recreating the past at Mount Vernon, shameful parts and all

Perhaps the biggest surprise of our Washington stay was the city’s affordability. Penny-pinching RVers can get around on the impressive transit system, visit all the free war memorials, of which there are too many for a country that purports itself to be a peace-loving nation, and occupy themselves from morning to night without breaking the bank. Public buildings around the National Mall even encourage tourists to eat in their inexpensive cafeterias.

Wanna see this at the Natural History Museum…it’s free

How about a couple of Cold War missiles….also free

Prefer a little culture in your museums….free

All the Smithsonian’s are free. Gratis. I say all the Smithsonian’s, because although it is one institution the bulk of its exhibitions are spread around the National Mall in 11 locations, each with a different theme. There are 19 locations in all, 17 of them in Washington. The bigger ones, like the Museum of Natural History and the Air and Space Museum, are so comprehensive a full day of gawking doesn’t do them justice. We spent a half-hour in the American History Museum playing the Price is Right at one of the interactive displays in the pop culture section. Overpowering, awe-inspiring, stupefying, whatever superlative you choose won’t be overstating the Smithsonian experience. 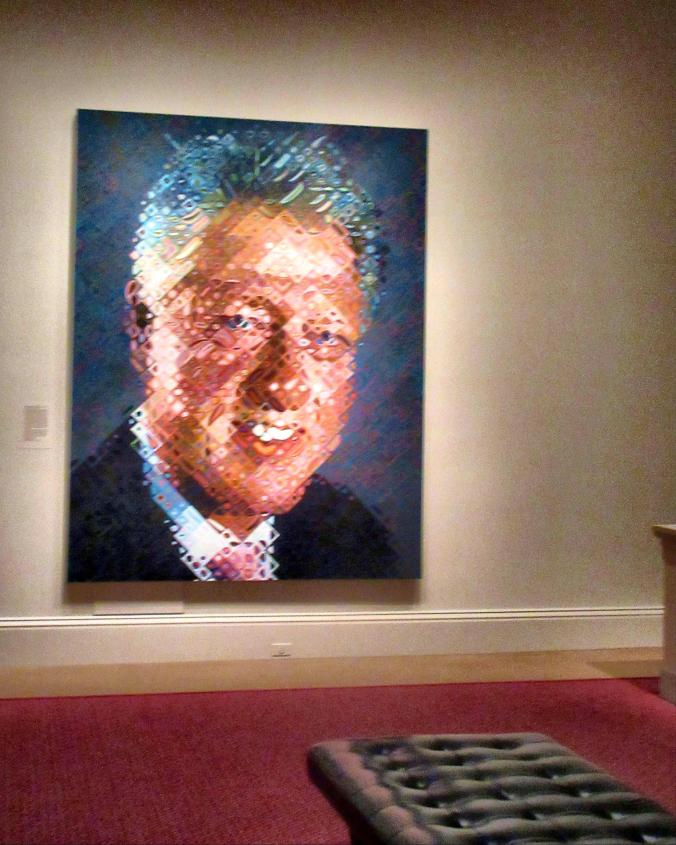 Leave it to Bill to have the weirdest portrait

The multi-level National Portrait Gallery was of particular interest, despite our limited knowledge and interest in art. The Presidential Gallery pays tribute to every U.S. president, from multi-portrait displays of Washington and Lincoln to a modest portrait of disgraced Richard “I am not a crook’ Nixon. Bill Clinton takes up an entire wall in a connect-the-dots modernistic interpretation of the man ‘who did not have sexual relations with that woman.’ Other rooms off the tiled hallways that are themselves works of art, house portraits of famous Americans from Elizabeth Taylor to the writer William Faulkner, from Einstein to Marilyn Monroe. Katherine Hepburn’s display includes her four Best Actress Oscars.

The iconic Washington monument as seen from the World War I & II monuments, which are just down from the Lincoln memorial and across from the Vietnam War memorial and they’re all fantastic, wear good shoes when visiting

With heads filled to bursting with information and a better understanding of what it means to be an American, we point the Mean Machine south, to the place where the first shot was fired in the bloody war that almost ended the American dream. (Yes, there is a Civil War memorial in Washington but in these politically correct times it is now called The War Between the States.)

Next: On to Charleston to experience southern hospitality and our first taste of grits.

2 thoughts on “A Plethora of Presidents”