A view of the er, Two Rivers that surround Trois Riviere

Using Shawinigan as our base camp (sort of like Everest climbers but without the mountain and fear) we set out to visit Trois Rivieres, our original destination where we were unceremoniously sent packing along with our request for a pull-through site. Even banishment sounds better in French.

Trois Rivieres is a perky city perched on the side of the St. Lawrence. It doesn’t actually have three rivers running through it, in fact the name has nothing to do with three rivers, I guess Trois sounded better than Deux, n’est pas?

The city is through and through Francophone. Beautiful heritage buildings including monasteries, stone churches and government buildings are scattered through the historic downtown area and include inscribed plaques detailing the history of said building without a single word of English. It became a game of picking out the few French words we know to piece together what it was we were looking at.

Number one tourist attraction in Trois Rivieres is the jail. Not just any jail mind you but a jail dating back to 1822. In operation until 1986, it’s a fully-operational crowbar hotel with NO BATHROOMS. I kid you not, each cell had a slop bucket, or in the case of numerous inmates, a couple of slop buckets to do your business in. I don’t know about you but given those circumstances my colon wouldn’t work for a year.

The Dude is sentenced to the Big House for tourist infraction #3, wearing sunglasses indoors at all times

We booked the English-speaking tour for four o’clock, which it turns out was the only English-speaking tour. The museum has a tour holding room where we sat along with about ten other jail junkies waiting to visit the Big House. It became clear why there are no English translations anywhere. It turns out we were the Anglos on tour.
The cells and other areas are kept in their original state and reinforces the “I am never going to jail, ever” mantra I’ve subscribed to all my life (thanks Mom). 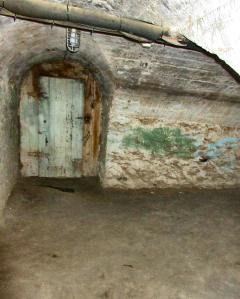 Yikes, this is definitely a step down from a room at the Four Seasons, note the lack of bucket. Ahem, wear shoes on this tour

Creepiest moment of the tour was the jail cellar and the solitary confinement cell, a room with a dirt floor and no lights, where inmates who misbehaved were kept, sometimes for days at a time. The guide shut off his flashlight and let us absorb the absolute quiet and darkness that the inmates were subjected to. No slop buckets here, the inmates had to do their business in a corner. I would have been crying for my mama after five minutes, The Dude in about three.

Beautiful Heritage buildings are the norm in Trois Riviere, this one is slowly being devoured by the local foliage

Our plans to visit Quebec City next were delayed, our chosen campsite was full until after the weekend. This was our first experience with “no room at the Inn”. The siren call of summer brings with it the exodus of suburban familys leaving their comfortable homes and bathrooms for a visit to a campground, where they will eat tubular meat products, sit huddled around a roaring fire and shower in a public washroom where young children wander about peeing on the floor.

Plan B, assuming we had a Plan A, needed to be put into action. Bring out map, point finger at map — Sherbrooke here we come. 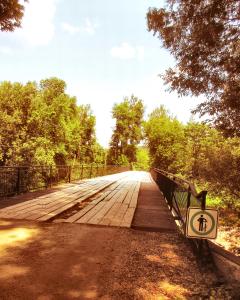 Sherbrooke has that feeling of an old favourite toy. A little tattered around the edges, operates fine but it’s seen better days. The campground was massive, situated on a little island that had a bridge that resembled something your Uncle Henry slapped together on the weekend. It has the look of something that will be in the news sometime in the future “disaster at Quebec campsite as bridge collapses”.

Tall or short, clown-like performers will always be creepy to me

Summer is festival season; people love to get their groove on in the few warm months here. Driving through town, we notice barricades being set up and what looks like a stage and a number of establishments offering sustenance to weary travelers. Thanks goodness the menu has pictures of both liquid and food products and beer appears to be a universally understood word. Down the lane from our chosen establishment a large stage is being set up, along with a beer table.

It turns out we’ve arrived for one of the free Concerts de la Cite that occur throughout the summer with live music and elements of cirque du soleil thrown in. Above the street lithe acrobats frolic and hang from a wire crisscrossing the road. The wire appears to be attached to an apartment building window. Court jesters on stilts walk by. This must be what being on acid feels like.

The bass player wards off an attack by an irate fan

We sit in an outdoor patio enjoying the live street show, watching crowds of Sherbrooke citizens, young, old, Gen X, Gen Y, hippy, yuppy, you name it, every clichéd generational group was represented, including a contingent of the Man-bun crowd with a respectable showing by the side-part guys. A duo sets up inside the patio and plays great renditions of classic 70’s rock and blues.

I think I’m liking this Plan B business.

Best view in the house

2 thoughts on “Hmmm did somebody say Plan B”