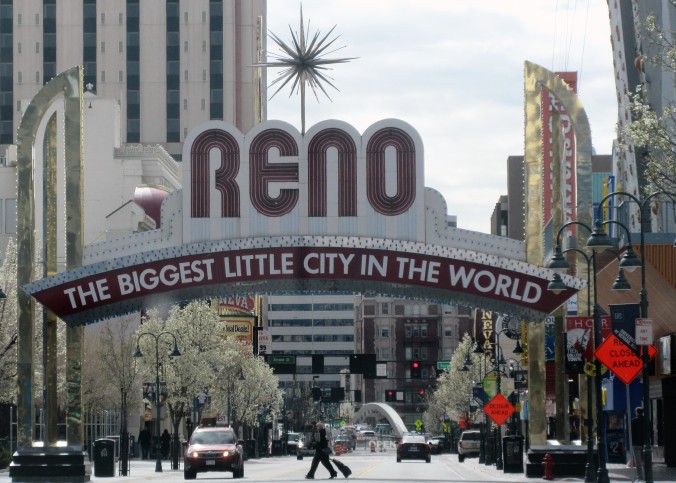 Soggy tails tucked, the Meanderers bid a wet farewell to California, an ignominious ending to our sunny days in the land of beaches, swaying palms and wind farms. You may have put a damper on us this time San Francisco, with your unending deluge, but we are hardy Canadians and veteran Vancouverites and we will be back.

The rain put the kibosh on our intended route along the scenic Oregon coast and, in search of better weather, we head northeast to Reno, Nevada, over the Sierra Nevada Mountains and the Donner Pass, which at a daunting 7,252 feet, with snow forecast, may not have been the best choice for a leisurely RV trip. The amazing vistas required a rosary or a stiff drink for full appreciation as we wound our way ever upwards with snow piling up beside the road.

The Dude, who was calm throughout the drive (I’m starting to suspect pharmaceuticals), happily discussed the Donner tragedy, in which a large extended family and friends travelling west by wagon train starved in the snowbound pass and met a gruesome end detailed in a couple of made-for-TV movies that probably turned more than one TV viewer into a vegetarian.

Send in the Clowns!

Reno has always been the ugly step-sister to Vegas’ Cinderella, a little down at the heels, but friendly. The drinks are faster, the slots are looser, the food is cheaper and the people are friendlier. Its citizens take so much pride in their second class status they made it the city slogan and emblazoned it on a massive sign over the street that passes for their strip—The Biggest Little City in the World. 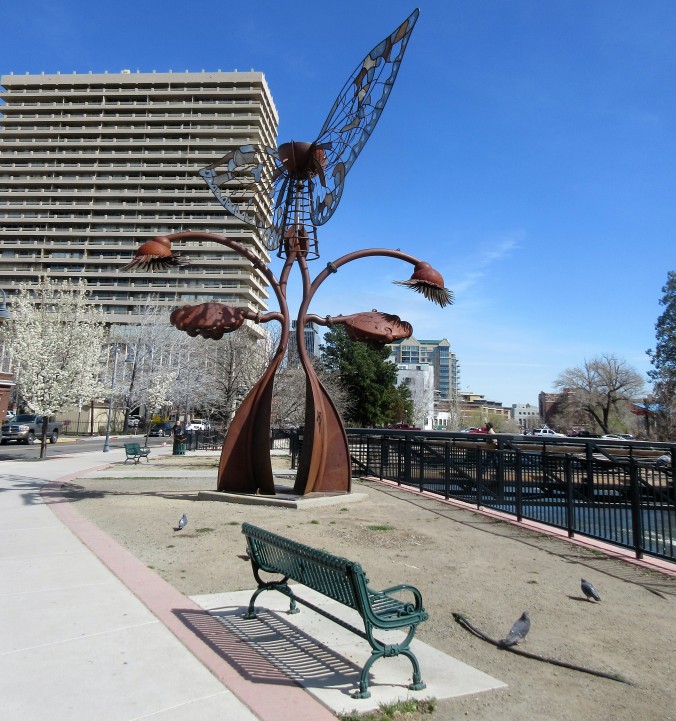 The Truckee River trail in Reno, not a slot machine in sight

Reno’s strip in daylight has the look of a 50-year-old trying to pass for 25 (please note, nothing in this article in any way alludes to the Dame, who maintains her youthful glow naturally). To help gamblers walk off the stress of losing, city fathers built a lovely pathway along the Truckee River which meanders through the heart of downtown out past tree-lined streets with well-kept bungalows, townhouses and riverside mansions, a world away from the clanging of slot machines.

Wheels up in Reno

We booked a week at Sparks Marina RV Park, worth all of its five stars on Trip Advisor. A marina in Reno? Okay, it’s a man-made lake that anyone with a speedboat could cover in about a minute. But it’s surrounded by parkland with walking paths, picnic areas and has a great waterfront dog park. This being Reno, a half-block away a casino advertises itself as friendly (!) while laying claim to the best cheap food in town. At the other end of the road, an outlet mall and a brew pub beckon. The Meanderers have found paradise.

Nevada has more going for it than the clang of casinos, and the sirens who await your pleasure at the various outlying ranches of ill repute. Yes, sinners, there’s a lot of history in them thar hills. And beautiful hills they are, with their snow-caps shining against the brilliant blue sky. The gold rush of the 1800s spawned a lot of boom and bust towns in the west. Remnants of once-thriving communities remain, home to a few hardy souls who stay for the quiet lifestyle and others, who like their entrepreneurial ancestors, hope to turn turds into tourism treasure by calling the abandoned buildings ghost towns. 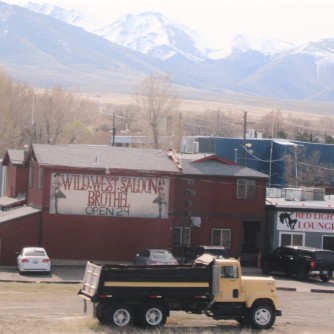 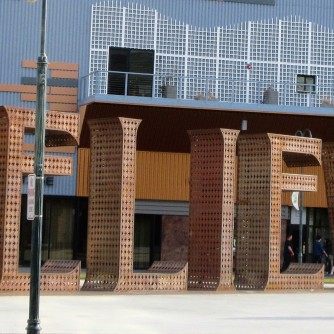 Virginia City is famous for the Comstock Lode (the first silver rush) that drew treasure seekers from around the world. And later, for being the hometown of the Cartwrights–Ben, Adam, Little Joe and Hoss–who frequently rode in from the Ponderosa for a beer and a barroom dust-up. At the height of the mining boom, Virginia City boasted more than 15,000 residents, but is now home to about 850 people who live to recreate the frontier mining town experience for your perusing pleasure. Tourists stroll its wooden sidewalks shopping for t-shirts and trinkets in saloons, restaurants and former brothels that date back to its heyday. Surprisingly, the town boasted an opera house and a number of live theatres. 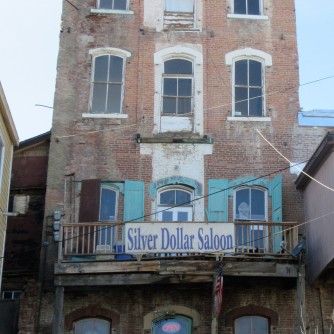 The Saloon’s back entrance has seen better days

The Dude and a Saloon a match made in heavan

Mark Twain, then known as Samuel Clemens, spent time in town working at the paper. His tenure is said to have ended when a disgruntled reader took exception to his reporting and challenged him to a duel. Twain, who may have accepted the challenge while under the influence of alcohol, took the first train out of town in the morning, ending up in San Francisco. His time in the Sierra Nevada mountains coloured many of his subsequent writings.

During his brief tenure Mr. Twain made an impression

Virginia City is seriously hungover the Monday we arrive, with many of its shops shuttered in the wake of the weekend’s raucous Rocky Mountain Oyster Fry. A tattered flyer advertising the “Ball Breaker Saloon Crawl” offers a hint of the festivities. This oyster fry (readers claiming to have big cajones, please note) involved a whole lot of people cooking up a whole lot of bull’s bollocks for their dining pleasure. The names of competing teams say it all: “Cajones Caliente”, “Virginia City Testicle Chili”, “Nut Up or Shut Up”

So sorry we missed it.

The present day tourist centre is housed in the former Crystal Bar, established in 1867. A gorgeous multi-coloured chandelier dangles dangerously in the centre of the room above the stained and dented long wooden bar where Twain and other swells bellied up. The original mirror, shipped over from France with the chandelier, reflects pictures of the town’s colourful past on the opposite wall. Squint your eyes and imagine yourself, cigar-in-hand, downing a shot of whiskey in preparation for a trip to the bordello upstairs. (Okay, that’s the Dude’s fantasy, not mine.)

Booze is still for sale at the Tourist Bureau/former saloon

The striking chandelier is original as is the bar

The Crystal Bar is manned by a friendly gentleman with mutton chops dressed in collarless shirt and vest. He tells us that at its high point the city boasted 115 bars and saloons. Only five remain, luring tourists with unappetizing names like “Bucket of Blood”, Red Dog Inn and even the Ponderosa, a nod to the TV show.

No ghost town is worth its bones without a graveyard and Virginia city has taken a casual approach to skeleton storage; some might even call it chaotic. The graves, in varying states of disrepair, extend over scrubby desert hills at the town’s edge, marked by vandalized weathered stones and buckling slabs surrounded by wrought iron fences.  Reading the faded inscriptions brings back to life the pioneers who defied hardship in pursuit of the earth’s shiny treasure. The entire township is riddled with tunnels, caverns and cairns where miners staked their claims and toiled with an optimism that was seldom rewarded.

Alrighty we get the message

After a thirsty night downing shots at the saloon and a quick spurt (sorry) up the stairs to the brothel, many a miner shamefully headed to church to atone. We‘d been tipped off to visit the Presbyterian Church, built entirely of wood in 1867, one of the few buildings to survive the great fire of 1865. Perhaps the gods of fire thought things will be hot enough for Presbyterians in the afterlife.

The church is looking very ‘ghost townish’ when we pull up, its large but rickety front doors locked to the world. But wait, as the Dame captures the loneliness vibe of Presbyterian life in a former boom-town with her 8,283rd photo of the trip, a small car pulls in. Could it be the church police with a warning to be out of town by sunset? Or maybe a strapped Presbyterian minister with a prepared sermon about invading the privacy of the religious right. Not so much, non-believer breath.

It turns out that Dave, who lives in Reno but keeps a small place in Virginia City, is here to check out the church’s antique organ, which he’ll be playing at an upcoming special service. No cranky Presbyterian, he invites us inside for a tour of the church and an impromptu pipe organ serenade. The gloomy, but beautiful wooden building comes to life as he works the pedals and keyboard, its arched ceiling filling with the sounds of the great beyond.

Dave puts on a private recital for the Meanderers

Next up, a summing up.